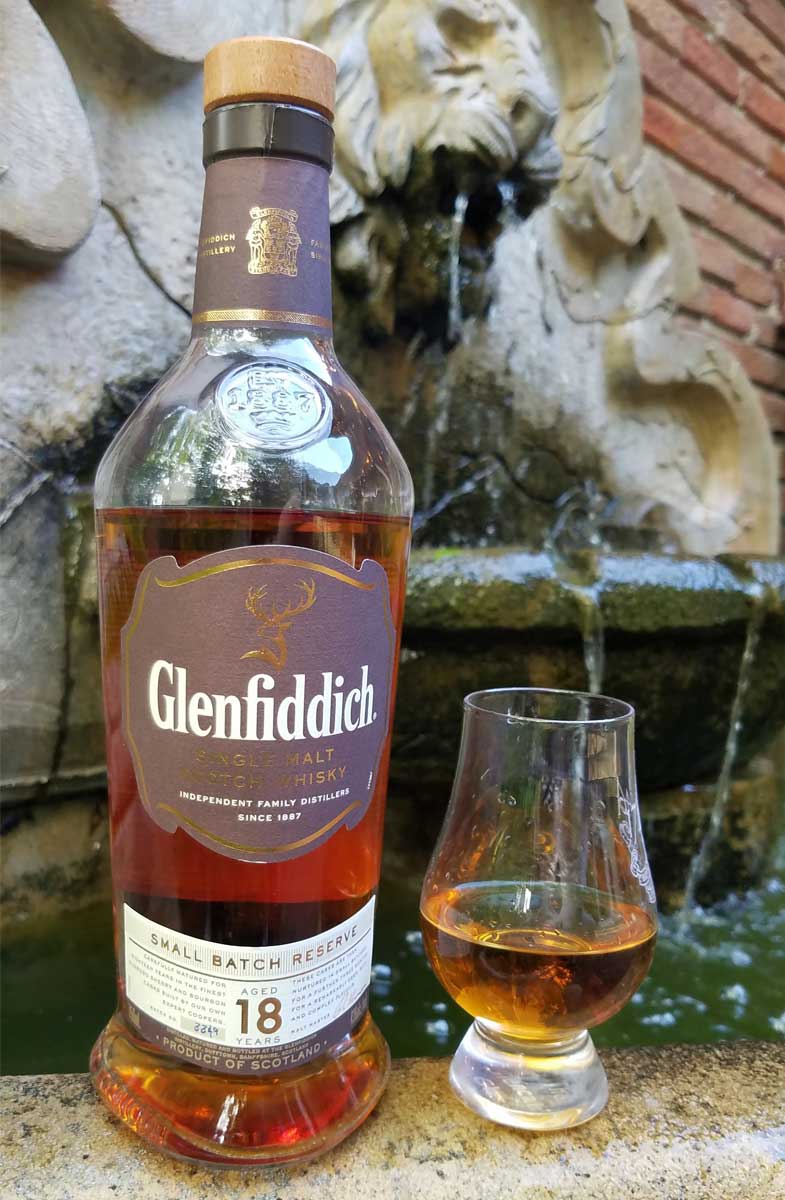 Do You Believe in Second Chances?

Is there redemption for a whisky that just didn’t do it for you at the first taste? That initial sip may be unexpected or disappointing. Do you write it off as bad or allow yourself and the whisky another chance for another day? Maybe you apply the baseball rule: give it three separate tastings before deciding its fate. And if it still comes up short than it’s “three sips and you’re out!” How many shots do you give an initially disappointing whisky before declaring, “That XYZ whisky is not good at all.” and never bother with it again?

Below is my review of such a bottle: Glenfiddich 18 Year Small Batch Reserve. It is a bottle that I had to give a second chance and in doing so, I learned a lot about the whisky and myself. Don’t automatically think I panned it. You can skip to the tasting notes or better yet, come along with me on my journey of understanding why we need to be fair to the whisky.

Getting Past the Disappointment

Full disclosure: Glenfiddich 18 Year Small Batch Reserve did not make a good first impression on me. Still early in learning about whisky, I was so excited to get an expression that was 18 years old. I liked the Glenfiddich 15 Year Solera and knew the 18 year would be much deeper and robust. I waited for quite a while to open the bottle as I knew it would be something special. Yes, my expectations were high.

What I experienced at first sip was terribly underwhelming. It didn’t live up to the hype I had created. I remember thinking that I’d wasted my money and that I should have bought something else – haven’t we all been there?!? I placed the bottle back in its tin and shoved it to the back of the shelf, as if it had offended me so much that didn’t want to see it.

Learning from My Mistake

Understand that stating even this amount of dissension is difficult for a southern woman as we are schooled to be pleasant and only positive. However, I was good and hacked and voiced my displeasure to a core group of whisky friends on the Scotch 4 Dummies Discord Channel. It’s there I started to get a different perspective and allow myself to learn from the situation.

The conversation started with a few of the whisky gents regarding 18-year-old “Glen” expressions – Glenrothes, GlenDronach and Glenfiddich.  Michael Porter (aka @sunday_evening_scotch on Instagram – give him a follow) offered that, “The Glenfiddich 18 has kinda been our “value” 18-year-old single malt, at around $100 usually. A great price for a quality 18-year-old.”

WheelHouseWhisky was encouraging too and added he felt the Glenfiddich got much better after being opened for some time.

Michael made another great point. “Definitely the whisky will open up a bit after you’ve poured a dram or 3 and then let it sit. But I think our palates can be so situational – depending on what else we ate or drank that day, and even just overall mood, or who knows what else. But I’ve definitely had some whiskies completely change on me over time. Both from good to better, or from great to meh.”

Perspective Lesson #1: I knew what they said was true, yet I still discounted the whisky. Was I being fair to the whisky? Did I really give this whisky a chance? Did I allow it to open up, to develop into the dram these two guys found it to be for them? The short answer is no, I didn’t. That’s my fault, not the whisky’s.

It’s a Matter of Preference, Not Quality

All this self-reflection reminded me of an experience I had touring the Robert Mondavi Winery in Napa Valley when Mark and I were on our honeymoon a long time ago. The tour guide was a woman who had a very northern California vibe with her wide-brimmed hat and long, flowy skirt. She spoke so eloquently about the grapes, weather, process and the final product that was delicious.

While in the tasting room, a tourist popped off about one offering saying, “I don’t like that one but this one (another offering) is better.” Our tour guide whirled around to the offending patron and ever so politely said, “There is nothing wrong with either of the wines you have just sampled. To say one is better than the other is to imply there is something wrong or bad with one of them. You simply prefer one over the other.”

I needed to remind myself that what one person likes may not be the trait or feature that appeals to someone else.

Perspective Lesson #2 – Yes, there are truly bad whiskies out there. This is not one of them. It’s an excellent whisky. To say otherwise implies there is something wrong with it when in fact, I’m wrong for the whisky.  It’s just not one I prefer.

Understanding Where I Am on My Whisky Journey

Have you seen any of Aqvavitae’s YouTube Recycled Reviews? There is an important lesson here as well. Roy goes through his tote of empties and does a quick recap of each before tossing the bottle in the recycle bin. Often, he talks about how the whisky changes for him as he works his way through the bottle. That the first pour is nothing like the last. As the bottle is exposed to oxygen and allowed to open up it may also change in the way it tastes. (See Perspective Lesson #1)

He also struggles with wanting to like some whiskies more than he did and generally it is because he has moved beyond them in relation to where he is in his own whisky journey.

Perspective Lesson #3 – I tried to make this whisky fit where I am in my journey. Not only is that not fair to the whisky, I completely set myself up for disappointment. I need to be more aware of what I need from an expression.

Being Fair to the Whisky

Think about everything that goes into making whisky. Granted there aren’t many ingredients: – malt, yeast and water – but there’s a lot of effort, chemistry and time that goes into each bottle. We won’t like every bottle made. And that’s okay. We are all different so it’s important to not only research the whisky but it’s extremely important to be aware of what we like in a whisky and not expect every whisky to be something it is not. We should give our due diligence to tasting the whisky with an open mind and giving it a fair shake.

So, having said all that, here’s my review of Glenfiddich 18 Year Small Batch Reserve. Thank you for seeing this through!

Sampling it neat….
Color: Medium Honey
Nose: Light cinnamon and baked fruit – like apple pie
Palate: Soft, balanced sweetness from baked apples and plums with light oak at the end
Finish: Short to medium finish with the sweetness hanging on more than the oak

This review is based on my fourth sampling and it is growing on me as I work my way through the bottle. Hooray for second chances! The nose gives you a clear indication of the taste. The Glenfiddich 18 is a relaxed, easy sipper with its sherry influence evident in the balanced sweetness from baked fruit. Oak comes on at the end but isn’t over the top.

With a little water… With a few drops of water, the sweet fruit opened more on the nose; as expected, the taste was much thinner and somewhat flat; and the finish comes to a quicker halt.

For me, it’s thinner than I prefer, which I believe lead to my initial disappointment. I’m still learning about what I like and need in a whisky. A higher ABV is pretty much “a must” for me. For most people, the 43% works. I wanted this to be something it isn’t. And in doing so, I wasn’t fair to the whisky.

It’s a whisky I would serve to a bourbon or rum drinker who is just venturing into scotch. It has great flavor and believe me, the bottle will not go to waste. (Sorry, Michael, I won’t be sending it to you!)

This experience taught me how important it is that I understand what I need from a whisky. Furthermore, it showed me that it is up to me to research and pay attention to the details to ensure an expression is built to check off the list of traits I want in a whisky. Only then are we fair and square.

Have you had this dram? What do you think about it? Thoughts on being fair to the whisky? Let me know in the comments below!

Special thanks to the Scotch 4 Dummies and men and women who frequent their Discord channel. I’m so thankful to have these virtual buddies who live all over the world, yet we have a space to come together and talk about something we truly enjoy – whisky. I’ve learned so much from them and it gives me an outlet to share what I know and think about whisky. I highly recommend finding your Whisky Tribe or at least a small group of people to banter with over a dram.